My full story on launching a side project to Hacker News. 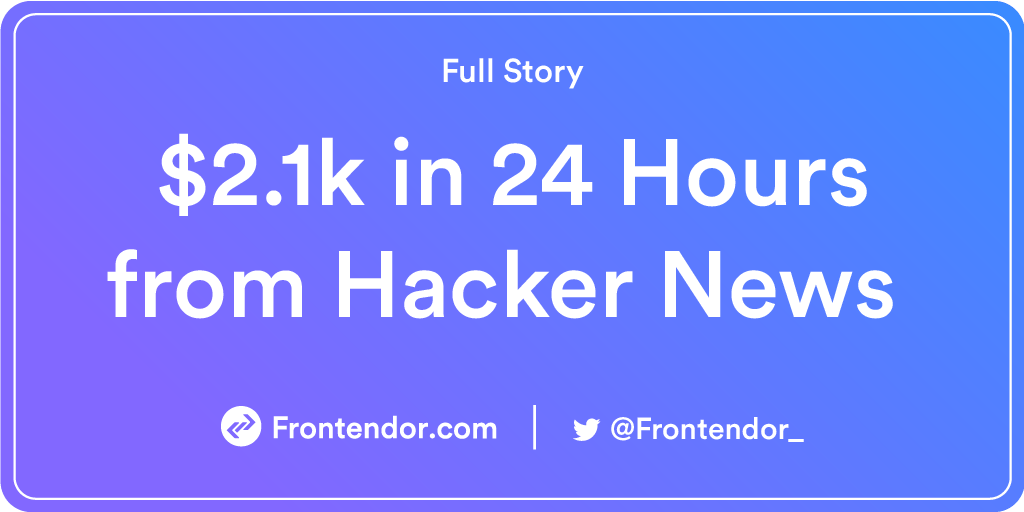 December 2019, I finally decided to kill my side project after 12 months of coding. It was a tough moment, I felt disappointed and angry because it was my 4th side project. I started coding in 2013 just to build my own projects but couldn’t do it. I started thinking maybe I don’t have the attitude or the intelligence to be like others. So I shut it down, and started looking for a full time job for the first time.

The days passed and the new year came quickly. I started the year by getting a new job as web developer at a startup, where I met an interesting guy called Ali. This man was the opposite of me. A successful designer and game developer who made some money from his side projects. It took him only few days to convince me to start working on another side project which was a stupid drag & drop website builder.

I had nothing to do back then, so I started working on it. At the same time, I started consuming a lot of content about marketing, building and everything related to startups. I kept learning about that topic while coding that page builder, and everyday passed, I lost more faith in that project, until the day I was sure that this was going to be my 5th failure so I decided to quit.

My partner felt disappointed because we were 50% close to finishing the beta version and he couldn’t understand my worries about building a product without having a target customer, marketing plan or even a clear strategy. It was just another page builder.

At this time I was excited because I just started looking for a new idea following what I've learned so far. After a few days, I got a new idea. I started doing some research, interviewed some customers and everything seems good. So I wrote a one-page marketing plan then contacted Ali again. He was skeptical and had no motivation toward the new project and kept reminding me to get back and complete our page builder, but even though I convinced him to stick with me.

May of 2020, we launched just a design and images of our coming product with a dummy landing page without any social proof but with a strong button to encourage people to pre-order our product. And after 30 days of promotion, we made $0.

June 2020, we completed building our first version of the product with real value and a lot of improvements in our landing page. Our plan was to do promotion for 30 days straight without coding or designing! Promotion only and nothing else.

The results were tough, I login to my Gumroad account every day morning and night to see the $0 in our balance, no one wanted to buy it. 30 days of promotion was a complete waste of time. I felt ashamed because it was my idea and my fault, I felt like I was the reason to lead Ali to be part of my failures. I started thinking about quitting all of this and stop trying to build something, it seems like I’m not going to build something useful and this is who I am by default.

The 1sth of August came quickly, and I received a message from my partner in the afternoon saying “Hey Hamza, you said that we can launch our product on Hacker News isn't it?”

Me: “Yes, but our product seems to be useless until now and Hacker News is toxic! We will not make it there for sure”

Ali: “Just launch it, we have nothing to lose”.

I knew that we had nothing to lose, I just wasn’t able to handle rejection again from Hacker News people, but at the end I decided to take action.

Every time I remember that Saturday, I think what if I didn’t take action that day? What if I did quit?

I called Ali on the phone and told him: “do you know something! Maybe this project is not going to succeed, 60 days without sales seems to be a strong indicator of being useless.”

And all of a sudden, we got an email from someone saying: “Hey guys, congrats on taking it to the front page! Do you have any plans to add an ecommerce package in the future?”.

I was still on the phone, opened my browser to see that we are in the last position of the front page. A few seconds and we got our first sale, and the comments started showing up. Sales and comments every hour!! I started jumping in the room for every sale. $49, $147, $392... until I couldn’t jump anymore.

It was the best night ever in my life, I felt the high level of dopamine, it was an amazing feeling!! I felt tired that night and slept early to wake up in the morning with more than $1400 in sales. We disappeared from the front page after 17 hours but we kept getting a lot of traffic and sales until we hit $2100 in sales on that day.

Unfortunately, something bad happened! A small change we did on our landing page after a few hours on the same day has decreased the sales very significantly.

We launched a lifetime deal with a limited spots but we didn’t build a code to count how many spots are left, we were editing that manually (stupid). When we slept, we forgot that issue and in the morning we saw a one comment about that with a lot of upvotes which made it to be the first comment. Nothing is worse than making people don’t trust you! I think we were able to cross $5000 that night if we didn’t face that.

Since then, the sales haven't stopped! With at least one sale a week even though we don’t have a blog, newsletter or other channel to promote it, it’s all organic from word of mouth and our comments on Twitter, Hacker News and Indie Hackers. $8500 in 7 months, we didn’t make a lot of money nor did we become rich! But we’ve got a great experience, amazing night and a story to tell.

Save 200+ hours-worth of designing and coding. 100+ UI Blocks & 6+ Templates With Online Copy-Paste Tool.